WBR: All founders build their missions around a problem they first identified. Could you tell our readers more about your own story, and the background and mission behind Starter Hacks?

I was originally an international student, and came to Waterloo to study health. My initial goal was to go to medical school, but during undergrad I got really into the tech world because most of my friends are computer science students. During undergrad though, I got roped into going to hackathons as a hobby.

As I went, one of the things I started to notice is that there was this idea that you have to be a computer science student to be useful in a hackathon. For example, when other hackers found out I was studying health they usually preferred to work with people from more technical backgrounds. That was kind of disheartening as somebody trying to explore the tech world. But I’m a very stubborn person, so I was going to do it anyway. There were also very few women there, so that you could count on two hands the amount at opening ceremonies. Coming from a health program that is relatively female-dominated, it was interesting to see that there aren’t that very many women in tech. 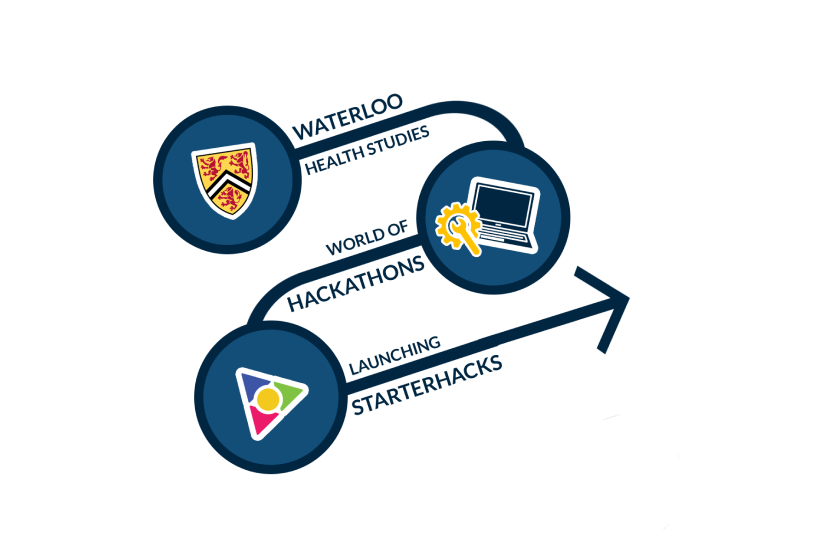 I also started realizing there are different elements that can be done differently. In my fourth year student, as a residence don at MKV, there were many students I worked with from an engineering background. Interestingly enough, they viewed hackathons as a magical event to apply to, but could never get in. From there, I realized this was very counter-intuitive because they were designed to allow students to explore new ideas casually over the course of a weekend. As a result, I started thinking how I could change this narrative of hackathons being this intimidating place.

All in all, I wanted to fill in a niche where students could focus less on the material prizes they left the hackathon with, and focus more instead on what students could polish up and take away to the next hackathon. Eventually when we did send out applications, about 50% women did apply, which was a welcome sight, as we wanted it to be an event to meet a diverse range of people with like minded interests.

WBR: StarterHacks focuses specifically on the theme of first-time hackers. What inspired this focus and how has this played into the challenge and the outcome of the competition?

The biggest misconception people have about StarterHacks is that we’re in competition with other events like Hack the North. However, our philosophy has always been to feed the people that will eventually go onto a Hack the North type event. We have a beginner-focus.

To begin, we conducted a lot of research about how to make things more comfortable for hackers. Students often felt very unprepared when they came into hackathons and often had to paddle through.

With StarterHacks we divide people into three types of roles, each with their own mandatory workshops relevant to their streams to break down each area a little bit. For example, we’ve got a design stream workshop where you learn how UX works, and what tools you can use for it. There’s also a business stream where you learn about market validation and pitching, which gives students a baseline of confidence before hacking.

Some other ways we differ include we try to create an environment that’s friendlier and less competitive, and also focus on less materialistic prizes such as touring Amazon’s office, shadowing a senior partner at Deloitte, or subscriptions to Adobe.

On the attendance front, about 50% of students are engineering, but the other 50% are all over the map. We’ve even had students as young as elementary attend, to students pursuing PhDs.

WBR: What was the biggest challenge when it came to launching your organization?

Initially there was a lot of pushback when finding place in the Waterloo ecosystem. We had to find where we fit in, which faculty was the best to support us, and whose goals aligned with ours the most. It was tough to navigate through the politics. From our initial idea, we had five weeks to organize everything, from buying food, to marketing. It was a stressful time for sure. A huge part of managing an organization is working in a team. For example, finding a team who will work for free always poses its own unique challenges as well. Specifically, people tend to drop off things if they have other priorities, so we had to learn how to get them to prioritize this event. Overall though, encountering these problems was a huge learning experience, as these themes will come up regularly in the workplace.

WBR: Do you have any advice for students and young women interested in pursuing their own entrepreneurial interests?

Just do it. Put on some Nikes and do it.

Start by talking to somebody in that market. For example, if you’re making an app for a certain target audience, talk to them about things you could improve. If you’re trying to solve a problem, don’t only go off of intuition. Make a product for the people.

Have some resilience. There will be a lot of nos. In fact, there will be 1000s of nos for every yes. You have to pick yourself up, and don’t let your ego get in the way. You might think you have the great idea on your own, but having a co-founder is also a game-changer, and is one of the best ways to receive ongoing feedback from others.

Get yourself out there. Lots of people underestimate entrepreneurship and think it’s going to come easy, but it’s never easy. Nowadays entrepreneurship is hyped through social media with media personalities like Gary V. Invest your time by going to networking events, or just meeting people.