Most kids that grew up playing video games know of a few behemoths in the industry, such as Activision Blizzard, which created Call of Duty and World of Warcraft, and Electronic Arts, which has brought out titles such as FIFA and Battlefield. However, what many may not know is that Roblox is worth almost as much as those two companies combined, which are the largest gaming companies by revenue in the world. 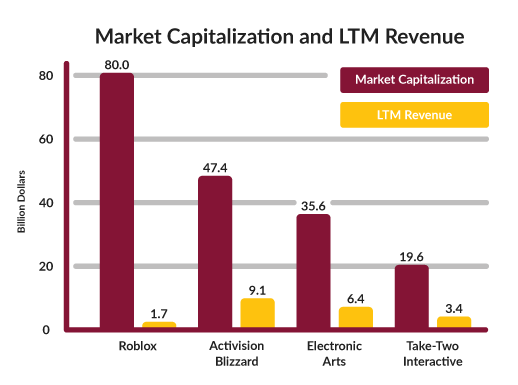 The significance of this is quite clear - as a standalone game, Roblox is worth more than entire portfolios of immensely popular video game franchises, including Grand Theft Auto and Call of Duty, making it the most valuable video game in history by a significant margin.

However, not all is well in the real world for Roblox. As can be seen by the table above of several prominent gaming companies, Roblox has by far the largest market capitalization, while also having by far the lowest revenue. The sky-high valuation of the company shows that investors are expecting robust growth from Roblox, requiring revenue to increase multiple times over. The question is, can Roblox achieve such a lofty goal?

Roblox provides a free platform for game developers to create their own games, with its revenue consequently derived from the sale of in-game currency, called Robux, which is used by players to buy skins and other items. This, in a way, makes for more of a recurring revenue scheme compared to many other games, where they are sold to customers once and for all.

It is evident that investors expect explosive revenue growth from Roblox, based on the incredible valuation of the company. The company is valued at nearly 40 times its revenue, compared to other gaming companies like Activision Blizzard, EA, and Take-Two, which all trade at between 4.6x and 5.7x (times) revenue. As such, investors expect revenue to grow by several multiples. 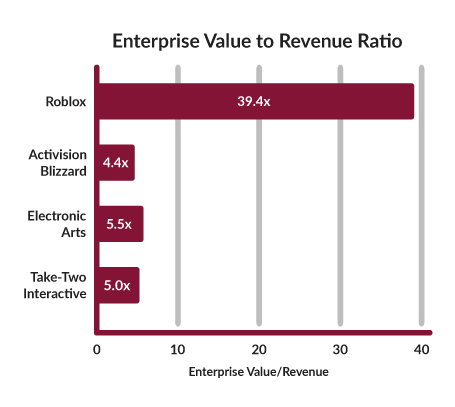 Revenue fundamentally has two drivers - volume and pricing. For Roblox, this is referred to as Daily Active Users (DAU) and Average Bookings per DAU (ABPDAU), the latter of which describes how much the average DAU spends on the game. Over the course of the pandemic, which forced people indoors and made them increasingly turn towards gaming as a form of leisure, the number of people on Roblox grew at a rapid pace, and so did how much they spent on the game.

However, cracks have begun to appear in Roblox’s growth story. Growth in DAU has plateaued in core markets of North America and Europe, meaning customer volume growth worldwide has been put in jeopardy. Additionally, ABPDAU has been on a downward trend since Q4 2020, meaning each user is spending less on the game. When one puts dangerously low volume growth with decreasing revenue per user, the threat to Roblox’s revenue becomes very apparent.

Keeping the above in mind, the results of Roblox failing to achieve the expected revenue growth would be catastrophic for the company. Roblox is still quite unprofitable, and requires revenue to increase to a much higher level to be able to cover expenses. Compared to an average peer group EV/Revenue multiple of around 5x, which indicates that the total value of these companies is on average five times larger than annual revenue, Roblox is valued at around 40x revenue, indicating that investors expect Roblox to multiply its revenue 8x.

Management, of course, is not blind to this issue. The CFO of Roblox, Mike Guthrie, laid out a plan to drive Roblox’s growth through several key areas: 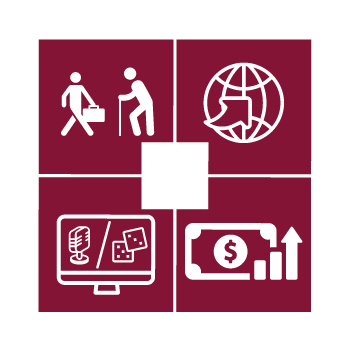 The goals will both help bring Roblox to a wider audience, and also give Roblox more opportunities to make money off each user. However, what isn’t clear is the implementation.

How can management implement a strategy to actually achieve these goals? By using the huge developer base that Roblox has access to, it has the potential to enter the online casino market in collaboration with established gambling companies.

Before discussing the specifics of how Roblox can create this new revenue stream, it is important to first understand the dynamics of online gambling. Traditional gambling is quite well known - one goes to a casino, and through a series of games ranging from slot machines to wheels of fortune, the player puts in money with the hopes of winning far more. The casino takes in money from all players, and a large portion of the money it collects is paid out to the winner, meaning the casino still retains a significant chunk of the bets.

The online casino essentially provides players around the world access to digital gambling games. Instead of taking a trip to Las Vegas or Macau, one can sit at home and gamble, making online casinos far more accessible than physical casinos ever can be. In fact, the online gambling market is estimated to have generated over $266 billion in revenues in 2021, with around $40 billion estimated to be gross revenue for the gambling providers. 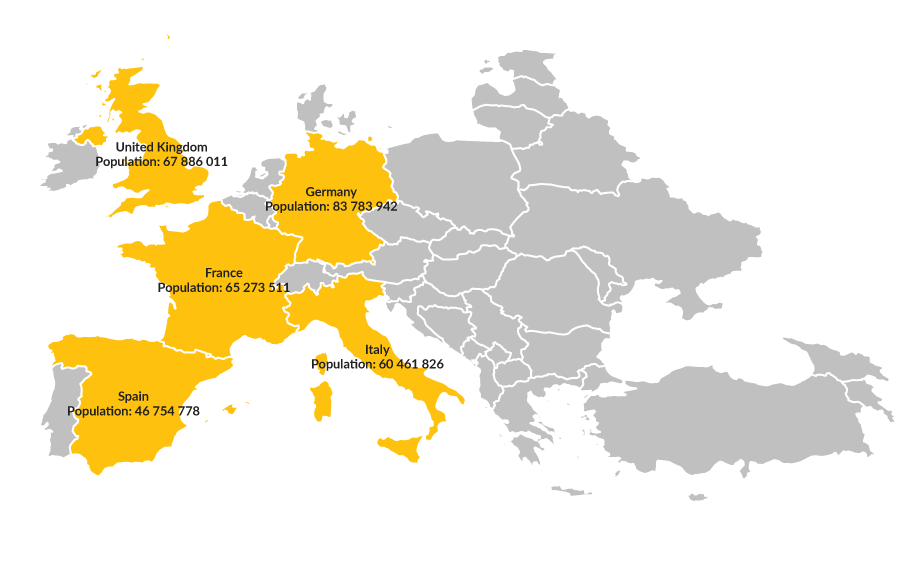 By focusing on the European market, Roblox has the potential to significantly increase its revenue over the next few years and revive growth in an otherwise- laggard geographical segment.

A strategy is only as good as its implementation - fortunately, the nature of Roblox makes it relatively easy to integrate online gambling offerings with the game. The key lies with its developers - independent programmers who can develop their own games on the Roblox Platform. These developers retain a stake in the game they make, as they make 30% of revenue generated through the sale of items, with the remaining 70% going to Roblox.

Currently, the majority of these developers make games primarily oriented towards children. Roblox could bring in more professional developers to create virtual casinos accessible to verified adults, which would contain casino games playable with real money.

The obvious question becomes: why would someone use a casino in Roblox as opposed to simply opening up a phone app? The answer lies in the more engaging and sandbox nature of Roblox. As a Global Newswire article pointed out based on an analysis of several academic studies on online gambling, convenience is the main driver behind the proliferation of online gambling. However, there is a certain lack of trust relative to traditional casinos that is a headwind for the countless online sites. Roblox, as a multibillion dollar company, could serve as a more trusted platform to power online casinos. Additionally, there is increased relative entertainment through Roblox - instead of just spinning a spinner in an app, Roblox could allow for users to actually roam around virtual casinos and digitally experience the ambience of world famous casinos.

For example, Roblox could partner with MGM Resorts International to bring iconic casinos such as the Bellagio to life within Roblox, essentially providing a “virtual tourism” experience. If MGM hosts its own Bellagio server within Roblox, it would be responsible for all design itself and would be using its own balance sheet for gambling purposes; however, Roblox would get a negotiated cut of revenue earned by MGM. This way, Roblox runs a high margin online gambling business without having to take proprietary risk, and MGM gets to capitalize on its brand without incurring additional costs associated with owning physical property.

The potential doesn’t just stop with the gambling activities in of themselves - with extravagant casinos built into Roblox, frequented by potentially millions of players, there exists the possibility to insert product placements and advertisements within these casinos, thus offering supplementary income for both Roblox and its casino partners.

This strategy would do a good job of meeting the CFO’s goals. First of all, by turning Roblox into a platform for activities that can legally only be done by adults, this helps drive expansion into an older population segment. Additionally, this plan would result in renewed international growth, primarily within Europe and eventually other countries. Finally, this service offering would achieve the dual goal of expanding monetization strategies, by opening a new revenue stream from casinos, and expand platform uses beyond traditional video games and into casino games.

Overall, when partnering with large casino chains, Roblox has the potential to significantly increase its revenue. It is not enough for the company to keep trying to make money off of selling Robux used to purchase in-game skins and items. Instead, Roblox has the potential to capitalize off of its relatively decentralized platform that can be used to create casinos. Casino operators like MGM until now have run their operations out of physical locations owned by companies like Blackstone - what’s stopping Roblox from acting like a digital casino real estate investor, except with almost no actual acquisition costs?

The financial potential is no doubt enormous. As previously mentioned, the European online gambling market in 2021 was worth approximately $20 billion - if casino operations run on Roblox could capture even 5% of the European market, this would amount to $1 billion earned by these operators. With the typical 30-70 split, Roblox could earn $333 million, instantly increasing revenue by around 20%.

When factoring in the 28% annual market growth, a growing market share within Europe, and online gambling getting legalized around the world, it becomes pretty clear that if executed the right way with the requisite partnerships, Roblox has the potential to transform itself from a children's game platform to a digital Las Vegas, complete with everything from online casinos to online battle royale arenas.