Lab-Grown Meat: The Future of Food

People have been eating meat for as far back as our history can be traced, but science has lately discovered a way to produce meat in laboratories. Lab-grown meat is the kind of meat that can completely be grown outside of an animal's body in a lab. Will it, however, render factory farms obsolete?

When compared to terms like free-range, lab-grown meat has frightening connotations of being “unreal”. However, this should not be the case. For instance, to begin the process of generating lab-grown meat, scientists will use a cow's stem cells, which are the building blocks of muscle and other organs. To help the muscle cells multiply and thrive, the cells are placed in Petri dishes containing amino acids and carbs.

The outcome is a flesh that mimics ground beef once enough muscle fibres have formed, which is much safer and cleaner to consume. 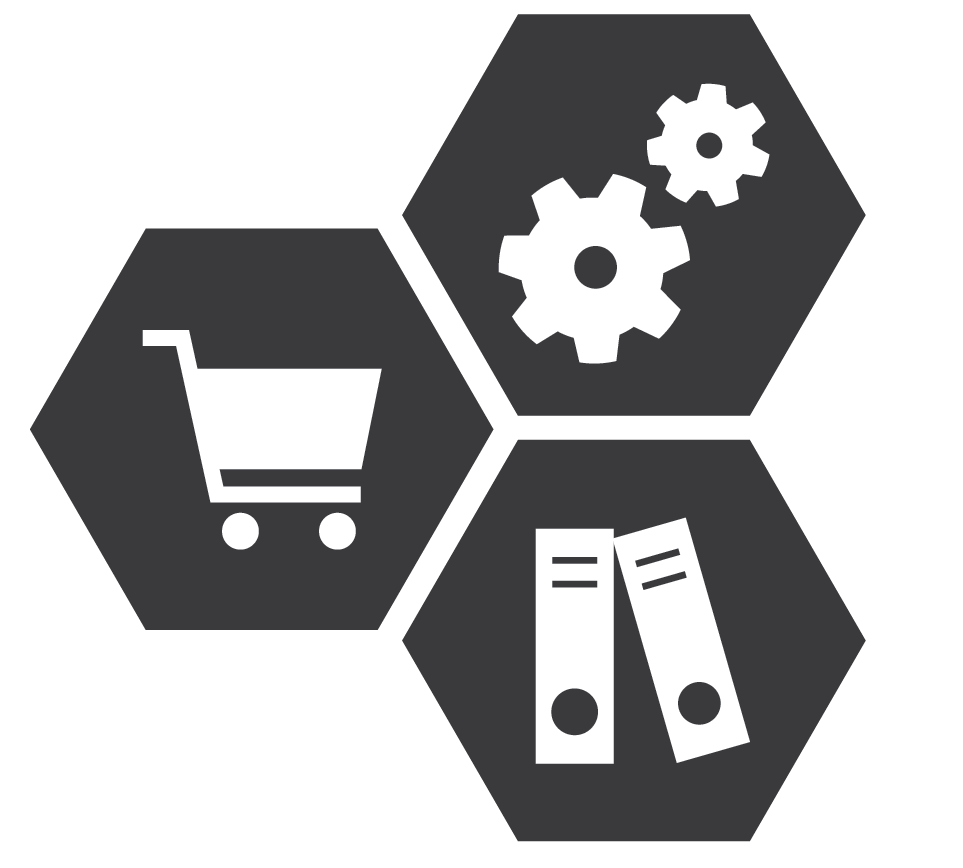 Traditional meat is considered detrimental to the environment, human health and the economy. Meat production uses 83% of global farmland and produces 60% of agriculture’s greenhouse gas emissions, which results in an increase in global warming. Animal agriculture also accounts for about one-third of the world’s freshwater consumption, contributing greatly to the depletion of this scarce resource. Moreover, approximately 70 billion land animals are killed globally, due to several reasons such as diseases and confined spaces.

Even antibiotics do not usually work since farm animals tend to develop antibiotic resistance, which contributes to the rise of antibiotic-resistant diseases, killing 700,000 meat consumers worldwide.

In contrast, lab-grown meat is produced in a sterile environment and is therefore free from bacteria like Salmonella and E. coli that live in the guts of animals. Given that traditional meat can cause several diseases, lab meat could eventually have a net health benefit as it can be engineered to have specific nutrient profiles. It can be engineered to provide optimal health outcomes for consumers, such as adding additional supplements. 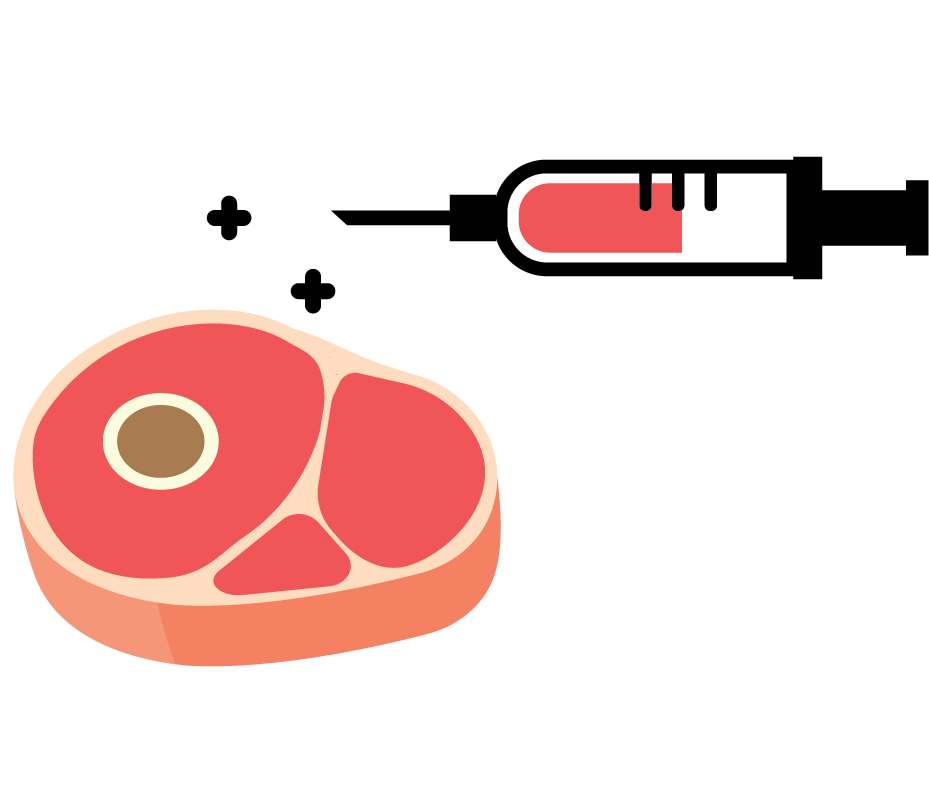 Once lab-grown meat becomes affordable, it has the potential to feed millions safely and sustainably to help ease the impending food shortage. With global food production needing to double by 2050 to meet the demand of the growing world population, lab-grown meat will become an integral part of the solution.

A common argument against the transition to lab-grown meat is that it would be economically detrimental to farmers. Although this transition has the potential to decrease the need for farmers, it is definitely much cleaner, safer and efficient from a consumer and economic perspective. Rather than compartment- alizing animals in inhumane conditions and utilizing non-sustainable synthetic livestock-raising procedures, farmers will be able to focus more on naturality and quality. This trend will have an impact on the unethical farming practices that exist in some commercial farms, forcing them to adapt. However, the transition to cleaner, safer, and healthier consumption will require massive changes in the market structures and lifestyle for billions of people.

Farmers can also potentially benefit from the shift towards lab-grown meat, as they will not face the same restrictive competition. In today’s meat industry, the competition is dominated by JBS, Tyson Foods and Cargill. This gives them the majority of the pricing power and forces farmers to sell their livestock to them. With the emergence of lab-grown meat and resultantly more competition, the pricing power of those companies minimizes and allows farmers to earn a better price. In addition to this, it is likely that traditional animal meat will become a luxury in the future and will be consumed less, which reduces the capital expenditures needed for livestock maintenance.

Despite the benefits of lab meat, it obviously is not as prevalent as traditional meat. One reason lab-grown meat is not yet readily available for consumption is due to the scale of production. The economic and engineering challenges of building full- scale facilities are prohibitive, requiring next-generation bioreactor platforms with the capacity to grow huge numbers of cells at high densities. With fewer opportunities to produce effectively and efficiently, this poses a significant challenge in growing meat in the labs. 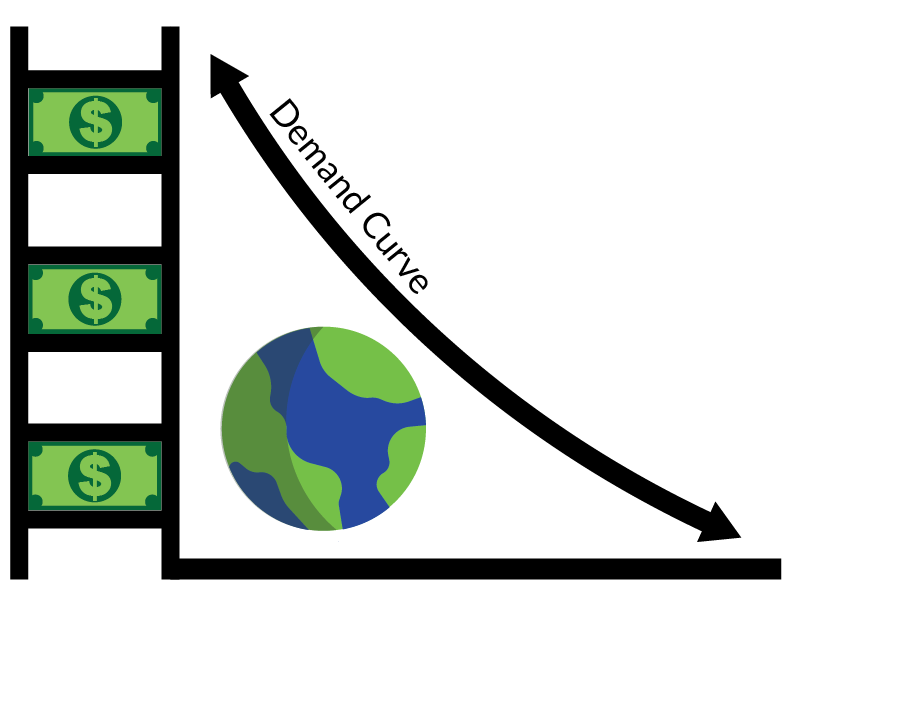 Furthermore, the process of creating lab- grown meat is sophisticated and tedious. Replicating the structure and texture of meat requires complex scientific techniques such as tissue engineering, which is shaping cultured cells into complex tissues. 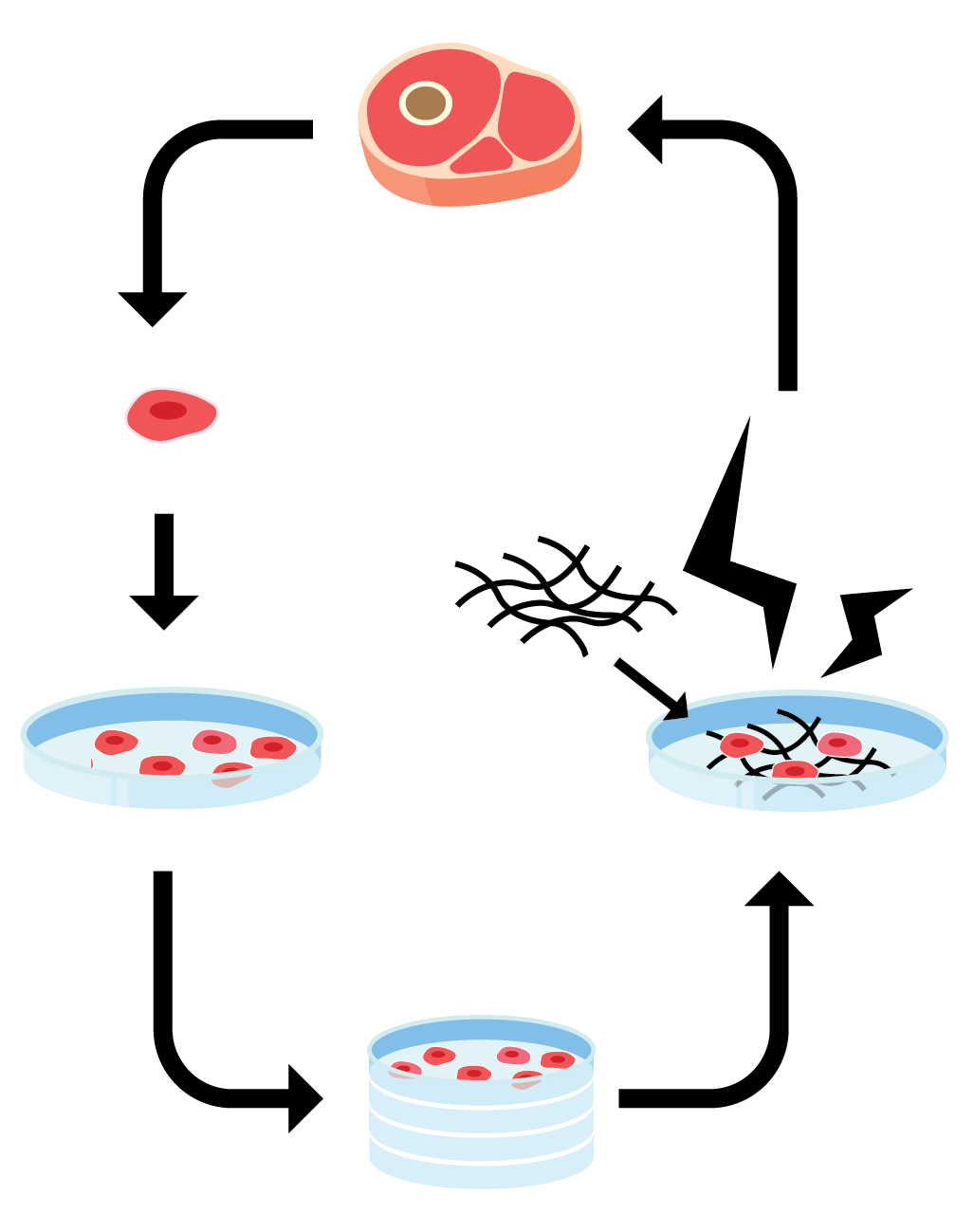 To date, tissue engineering has largely been focused on medical applications such as regenerative medicine and non-animal technologies for in-vitro models used for drug discovery and toxicology. The technical principles are the same for producing lab-grown meat, but for meat, the scale is much larger and the product must be affordable as a commodity. Without sophisticated practices of tissue engineering, lab meat will fail to look realistic and be affordable.

Moreover, the staggeringly expensive production cost can be attributed to the lack of current research that is available. The first lab-grown beef burger in 2013 was priced at $280,400. 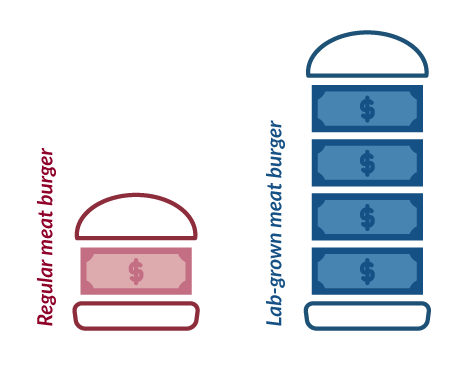 However, with significant analysis of the barriers to entry in the market, cost of innovation, how laws and regulations impact production, this price can be lowered to be competitive with traditional meat. With more research on the scale and techniques of growing lab meat to lower costs and increase production, lab-grown meat could certainly be as competitive as traditional meat in the market.

Future Meat Technology (FMT) is the world's first industrial line for lab-grown meat. FMT has conducted research into producing scalable meat and has found success in ways to reduce the cost of production. One idea they have is to use Fibroblasts, a more efficient nutrient media, which is a cell used for healing paper cuts. This is more efficient from a cell density perspective as it is cheaper and rapidly produces biomass since the cells double within 24 hours. It essentially reduces the cost of the meat and volume needed, while increasing cell density.

Another idea they have is combining lab- grown meat with plant-based protein, which would be easier to scale to market. FMT is partnering with Nestlé to blend the two proteins and create a new product that delivers the full flavour of meat at a lower cost. 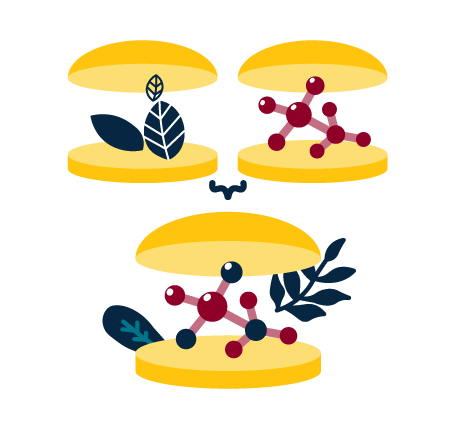 After overcoming the technological challenges and achieving price parity, lab- grown meat should be readily available to enter consumer markets. However, this step presents a new set of challenges with regard to consumer perception and acceptance. A survey of Gen Z found that 72% of respondents wouldn’t be receptive to lab-grown meat, with many seeing the process of production as unnatural and heavily processed. 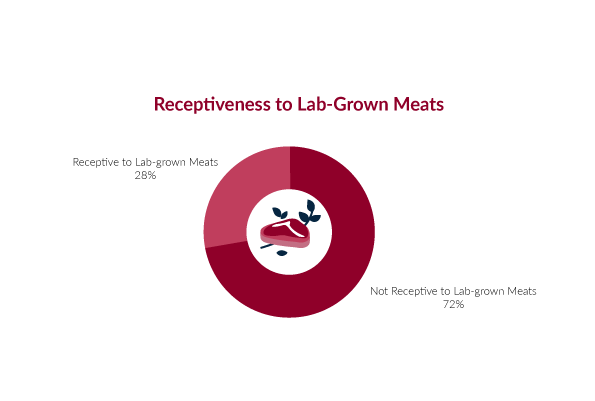 General consumer perception of lab-grown meat will be dependent on the branding of products, in particular, the terminology which is used to label these products. Suggested labels include “lab-grown”, “cultured”, or “cell-based” meat. How these products are branded will impact the willingness of consumers to try these products. The labelling rules will be determined by the FDA and USDA, which are jointly in charge of regulating lab-grown meat. 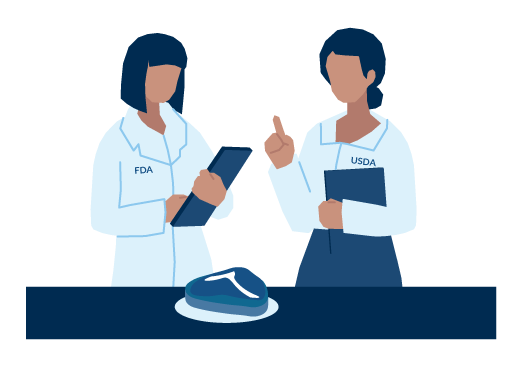 As these challenges are addressed, the adoption of lab-grown meat will have further economic implications for the agricultural industry and businesses. The process to create lab-grown meat is extensive, and there is strong regulation surrounding the creation. As the industry continues to grow, there is a unique regulatory process that has been implemented to ensure the safety of consumption. The cell culturing process will have strict oversight, the Food and Drug Association (FDA) will have jurisdiction over the pre-harvesting activities, and the United States Department of Agriculture (USDA) will oversee the post-harvesting processes.

However, according to the Federal Meat Inspection Act, a product can only be defined as meat if it is derived from a carcass. Since lab-grown meat does not abide by the definition stated, lab-grown meat will not be treated as a meat product. This leads to the Food Safety and Inspection Service (FSIS) drafting regulation for the labelling of lab-grown meat, and the specification of language that can be used in the labelling process.

Regardless of this, the European Union has adopted a different approach with their regulatory process. The framework that is used is dependent on the type of cells that are used and can fall under the EU Novel Foods Regulation or the genetically modified organism (GMO) legislation. The Novel Foods Regulation states when there can be requirements regarding labelling, in order to fully inform the consumer, for instance by describing the food or its composition, that must be addressed before being added to the Union list of authorized novel food. The current EU regulation on FIC (Food Information to Consumers) states that meat is made up of, “skeletal muscles of mammalian and bird species recognised as fit for human consumption with naturally included or adherent tissue.” Based on this definition, it is likely that lab-grown meat will not be labelled as a meat product in the current EU legislation.

In the lab-grown meat industry, there has not been a significant amount of intellectual property that has been claimed. There are two patents that have been declared by Eat Just Inc, which are for the industrial process, and methods for production. There could potentially be utility patents filed for the manufacturing process, machines used, cell lines, and chemicals used throughout the process. Design patents can be filed for the “look” of the lab-grown meat like the shape of T- bone steaks, chicken breasts. Patenting these technologies can lead to reduced innovation and information sharing, which will likely slow the progress to making lab- grown meat more affordable.

Lab-grown meat has the potential to see significant growth in the industry’s future, however, there are some difficult obstacles that are preventing the development. The next steps in order to successfully get to market and be successful, are addressing the economic implications that the farming industry and businesses will face. The goal of the lab-grown meat companies is to coexist with the current farming industry, rather than replace it. The belief is that while farmers could benefit from the emergence of this industry, there is no guarantee that a new system would be fairer, more equitable, or beneficial to individual farmers. The increase in the use and production of lab-grown meat would likely cause the loss of several jobs within the traditional farming industry.

Farmers will not be able to keep up with the production abilities of large companies, they will also not have the skill set to be able to transition to this new form of meat production. With lab-grown meat reaching a high level of scale, the production of traditional meat will drastically decrease and the price of traditional meat will likely go up. The next steps for businesses are to potentially create ways to alleviate world hunger as well as seek methods beyond agriculture to develop meaningful climate change mitigation. If lab-grown meat is able to reach a high level of growth, there could be a significant shift in livelihoods, operations, and supply chains across multiple industries beyond agriculture.

The continued growth of this sector will likely bring considerable social, political and economic implications for multiple and various stakeholders. It seems reasonable to argue that the production of small-scale lab-grown meat products of edible quality should be achievable in the near future and in some regards is possible now. However, the timeline for delivering this at a price competitive enough to compare with existing processed meat products is less determinate as a result of the scaffolding, scale and cost of production.

Given that the production is diffuse, complex, and multifaceted, the understandings attached to lab-grown meat could be reshaped by many factors that are beyond the control of the field itself. If lab- grown meat technology does reach the scale proposed by some that enable it to deliver meaningful climate change mitigation, this could be part of a significant and potentially global-scale shift in livelihoods, practices and supply chains across multiple sectors beyond just agriculture (e.g. steel and transport).